Illegitimate daughter of a pope. Married three times. Accused of having been the lover of her brother and father. Accused of poisoning dozens of enemies. Accused of having lovers. Lucrezia Borgia has been vilified and acquitted several times. What will the truth ever be? Was he just the victim of a family entangled in crazy murders? 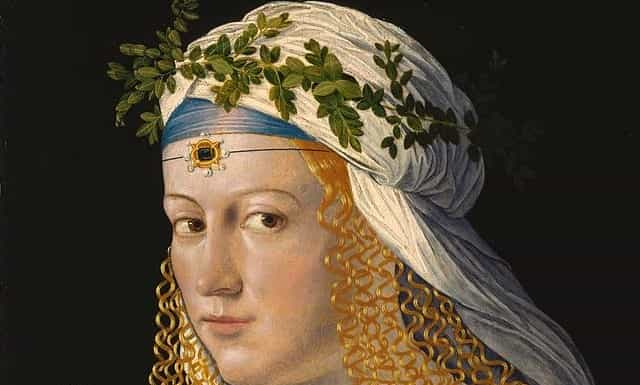 When “the women of 1492” were defined as such, Lucrezia Borgia was born and raised. Already at the age of 12, when her father became pope, she was a “married woman” in name and in fact. Illegitimate daughter, recognized and never declared, of Pope Alexander VI, Rodrigo Borgia, sister of the famous Cesare Borgia, the following year she was married to Giovanni Sforza, lord of Pesaro, and nephew of Ludovico il Moro. Lucrezia is a daughter of guilt but during her time, the libertine behavior on the part of churchmen was not so unusual. For Lucrezia it was her surname that made her a real princess. She was immediately admitted to the luxuries of the papal court. Lucrezia and the Borgia brothers were greatly influenced by their Valencian origins, in fact they were Spaniards considered foreigners in Rome at the time and therefore very close to each other. In particular, Lucrezia became more intimate with Cesare and between them there was a feeling of mutual love and fidelity. And it was soon said of them that they were incestuous lovers.

Even her father, Pope Borgia, who had involved her in the passion of his young lover, Giulia Farnese, wished her the utmost love. Also in this case she was involved in an intimacy that led several witnesses to scream incest. The pope never made Lucrezia “mate” with her first husband Giovanni Sforza, citing her young age, but in reality thinking of having Lucrezia marry a very different party with a very different alliance. In 1497 the Borgias tried to ask for a divorce between the two spouses, a divorce that the Milanese family did not want to grant. Lucrezia then declared that she had lived with her husband “without having carnal relations of any kind, ready to swear it and to undergo a demonstrative visit”. Naturally threatened with death, Giovanni Sforza signed a document on his impotence. But from that declaration he began to argue that the pope had separated him from Lucrezia “to join her”. The charges were increased by Burchard master of ceremonies of the papal court, which told of orgies and incestuous relationships. As her husband had been helpless during the annulment, Lucrezia was pregnant by a certain Pedro Calderon, said Perrot, a papal put. A clandestine passion, authentic, with a Spanish man whose Lucrezia however indirectly, would have resulted in death. His brother Cesare, probably out of jealousy and the gossip provoked, chased him through the rooms of the Vatican and killed him making the blood splatter in the face of his father, that is, Pope Alexander VI. Lucrezia in 1498 gave birth in great secrecy, her illegitimate son and her father had arranged for him the second marriage with Alfonso D’Aragona, illegitimate son of Alfonso II of Naples, and also his brother-in-law.

In fact, Alfonso’s sister, Sancha, was married to Lucrezia’s younger brother, Jofré: marriages between illegitimate children of rank. Another important detail of a family we say “affectionate”: Cesare had been and continued to be the lover of his sister-in-law Sancha from time to time. Lucrezia’s second marriage was true love: Alfonso was young, handsome and casual. He was stabbed by his brother’s assassins, Cesare, and when after the treatment he was saved, his brother personally strangled him to get rid of him definitively: apparently out of revenge and jealousy, apparently for new alliances in sight for poor Lucrezia. The woman retired to Nepi, in the province of Viterbo, for a period and broke off relations with her father and brother.
But after a short time he would marry Alfonso d’Este, the future prince of Ferrara. In 1501 Lucrezia was already duchess and here she was able to be appreciated by everyone, but within two years her life was again upset by other mourning. Her second husband’s son Rodrigo died first. Finally, in August 1503, both the father who died immediately and the brother who survived to die only four years later, victim of an ambush, fell ill. The death of the pope was natural? Poisoning for the Borgias was a great way to resolve many political issues. When ambushes, stab wounds, drowning in the Tiber, and throttling by hand or with ropes were not, let’s say, “convenient”, the Borgias used “a kind of powder, whitish, similar to sugar” of which they had tried the effect.
Cantarella is a variant of arsenic. This poison is obtained by sprinkling the entrails of pigs with arsenic, then drying them and finally grinding them. A white powder similar to sugar was obtained. Whatever composition the “cantarella Borgiana” had was a poison “aeroplanatum obtemperatum”, that is fast and sure success. Alexander VI himself fell victim to the cantarella, during a banquet in the villa of a cardinal in which his son Cesare also participated in addition to the pope. The pope died within a few days. Even if Lucrezia had not been a murderer it is difficult that she was unaware of the secrets and murders that filled the Vatican rooms. She became a great and admired noblewoman while continuing to have affairs with her brother-in-law Francesco Gonzaga, husband of Isabella d’Este, sister of her new husband.

Probably during the summer the two brothers-in-law were able to meet in one of the Ferrara holiday resorts. To increase the risks of the relationship there was also the underground rivalry, known by Lucrezia, between the Marquis Francesco Gonzaga and the Duke Alfonso D’este. He created a court of intellectuals and artists in Ferrara starting a platonic liaison with the musician Pietro Bembo. There were four years of war between the papacy and Ferrara and Mantua: Lucrezia had changed. Prone to devotion, she had begun wearing a sackcloth under her shirts and stopped wearing low-cut dresses; he regularly visited the churches of the city and listened to religious readings during meals; finally he joined the Franciscan Third Order. The most insistent rumors that depict her as “a kind of Messalina, intriguing, bloody, corrupt, not succubus, but an accomplice of her father and brother”, were taken up and reported and handed down to posterity in the chronicles and pamphlets by the numerous enemies of the Borgias.

There are two episodes that Burcardo, master of papal ceremonies, tells. The first episode is the “dinner of the courtesans”, a party with an orgiastic implication conceived by Cesare, on the evening of October 31, 1501. Duke Cesare Borgia Valentino had sent fifty courtesans to the palace: after a quick dinner, the courtesans were entered and had started dancing with servants and young people of the house; late at night Cesare had the lighted candelabra placed on the ground and the naked women on all fours had to compete to collect the chestnuts thrown at them, encouraged by the Pope, Cesare and Donna Lucrezia. The second episode, also narrated by the master of ceremonies, took place on 11 November 1501, when from a window, Alexander VI and Lucrezia witnessed a wild riding scene between four stallions and two mares. Since the two scenes took place shortly before Lucrezia’s departure for Ferrara, they may have been marital initiation shows that could not offend a woman who had already been married twice.